On Thursday 7th March, World Book Day was celebrated by the inaugural running of Walton’s Book Races.  Twenty four students entered this event, first completing a book review and then lining up their reading books in coloured lanes to compete. 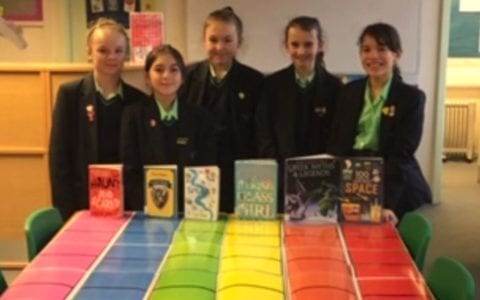 A wide variety of books were entered, reflecting the broad range of interests of Walton’s readers.  Competing books included novels with intriguing titles (‘The Colour of Bee Larkham’s Murder’), familiar children’s classics (‘First Term at Malory Towers’), graphic novels (‘Awkward’), truth-based historical fiction (‘The Tattooist of Auschwitz’), non-fiction books (‘100 Things to Know About Space’) and, appropriately for World Book Day, a novel in Hungarian, whose title apparently translates as ‘On the Light Water’.

Three races plus one extra for those who had watched and were keen to join in resulted in four winners collecting medals and bags of sweets, with every entrant receiving a lollipop and an achievement point.

Good fun was had by all, and, as a useful memento of the event, the reviews for all the books will be displayed in the LRC, providing some great peer reading recommendations for our students.